The news was broken by the unofficial site Toon Studios Productions who posted this video on Youtube (in French).

The video shows that once connected to the network, the game is accessible via a smartphone’s web browser. This means that it is likely that the game will be playable on a large range of devices, spanning Android and iOS.

The game itself involves moving Crush around the screen to pick-up stars and avoid rocks. “Crush’s Coaster: The game”, which is currently only shown in the video in French, was tested by Cast Members from the Annual Passport team. It is not clear whether the game will be made available in English or other languages.

The new game, which is the only of its kind in Disneyland Paris, is likely to be received well by fans due to the incredibly long queue times of the Crush’s Coaster attraction, and relatively unexciting theming of the exterior bulk of the queuing system. The ride often has queue times exceeding one hour long, and Disneyland Paris recently introduced a Single Rider queue to help maximise the attraction’s capacity. Disney will be hoping that this new game will make the queue at least seem to go a bit faster!

Disneyland Paris has now given an official press release on Crush’s Coaster The Queue Game, the details of which are shown below. Highlights include that the game features 5 increasingly difficult levels and will be available in both French and English.

What is it about?
Crush’s Coaster, the Game is an interactive mobile game for smartphone and tablet, available in French and English. Visitors do not need to download the game on their smartphone or tablet, they directly play from their web browser.

What is the purpose of the game?
The mission is to help Crush become the best surfer in the East Australian current and avoid obstacles while gathering a maximum of starfish.

The program includes 5 levels with increasing difficulty and between each level, riddles to solve with their family or friends.

In level 1, Crush has to reach 4000 points to get to the next level. The player has to avoid boulders and running speed in the game area is very slow.

In level 2, Crush has to reach 9000 points to get to the next level. The player has to avoid jellyfish and running speed in the game area is slow.

In level 3, Crush has to reach 15000 points to get to the next level. The player has to avoid mines and running speed in the game area is average.

In level 4, Crush has to reach 22000 points to get to the next level. The player has to avoid sharks and running speed in the game area is fast.

In level 5, there is no limit of achievable points; the player has to make a maximum of points possible until he touches a foe or an obstacle. All foes and

obstacles are present in this level and running speed is going faster and faster.

When will the game be available?
Crush’s Coaster, the Game will be available in September 2014.

Where can visitors play?
Visitors can play at Crush’s Coaster, the Game exclusively in the covered exterior waiting line of Crush’s Coaster ride thanks to a free Wi-Fi network.

Do we charge for the game?
The game and the connection to the Wi-Fi network are completely free for all visitors.

Is it possible to navigate on the Internet with the Wi-Fi network?
The Wi-Fi network is exclusively dedicated to the connection to Crush’s Coaster, the Game. 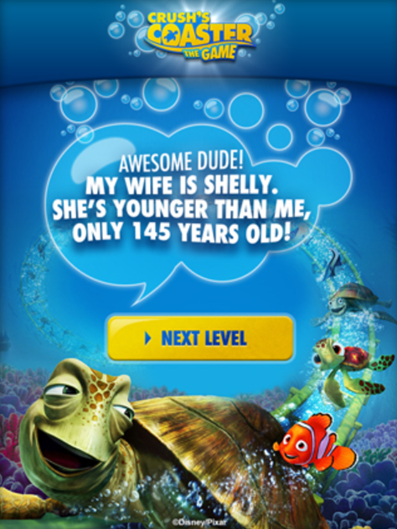 Sources within the park suggest that the game is playable already, a few days before the start of September.

For more news on this game as it becomes available, make sure you follow @MagicalDLP, or the author of this article @SIMCITYWEST on twitter!